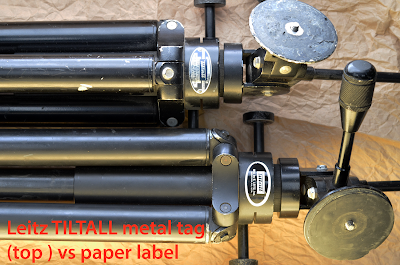 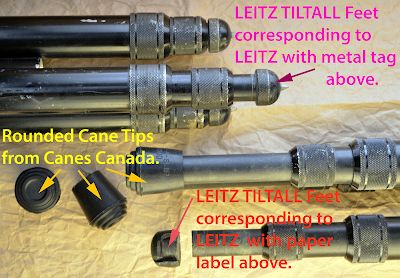 Bear with me as the three photos here will make no sense without a lot of explanation.  Many of you write me regarding foot replacement, but this is a knotty conundrum (see earlier post).  I will try my best here to answer the requests and make an inexpensive suggestion below. 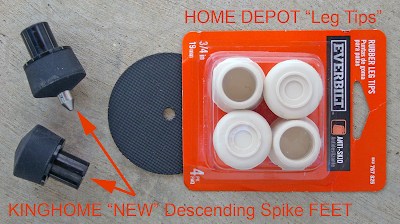 To wit: the original Marchioni had a foot design with a fixed rubber tip and a descending spike which the Leica folks continued (middle photo, upper left) until near the end of the Leica Tiltall (my conjecture) when they changed to a simple no-spike rubber foot (middle photo, bottom center).

(ASIDE: The cheaper and wiser no-spike foot version appears to have happened at the same time Leitz discontinued the metal tag in favor of the cheapo paper sticker. The sticker idea continued with Fred Albu's Unifot and Star-D on through various iterations to this day - though KingHome now has a paper sticker on one of the legs - to be changed shortly to a "laser" etching.)

Following Leitz, Fred Albu of Camera Barn (another earlier post) made several slight redesigns to his Unifot version of Tiltall and in his Star-D (see original Star-D before Mr. Albu).  Fred reversed the foot design to a fixed spike with a descending rubber foot that continued from his Unifot/Star-D to the Omicron and to the current Tiltall by King Home Taiwan.

Here's the rub.  The threading on the Marchioni foot is different than the Leitz is different than the Unifot which is the same its brother, Star-D, which is the same as the Omicron and the same as the KingHome BUT it has been discontinued.  Enlarge the bottom photo with a click and note that Oliver has correctly made his new version without threads - good thinking!  Lots of glue should resolve this historic mess.  But expected sell price will be $15 per foot inclusive of shipping. This foot iteration should fit all Tiltall iterations.  However a matching set of the new feet will cost as much as an entire Ebay'd Tiltall - and from the Ebay deal you would also get an entire set of replacement parts - aka the entire tripod - with your three replacement feet.

Here's the better idea. DUMP THE SPIKE, GET A RUBBER.  For me, the only time the spikes in my Tiltall feet seem to become deployed is at the very moment I set the TILTALL down on my client's newly polished maple floor.  Forget the spike, and solve the replacement foot question inexpensively and harmlessly just as Leitz did in their final iteration.

Where to find a RUBBER: visit your closest home medical equipment supplier for a 3/4" rounded cane tips. The "rounded" specification is important vs the "flat" cane tips. But the rounded tips seem to be harder to find, often at $15 each.  I best I have found (shown in the middle photo, left) are from Canes Canada 2632 Garland St. Calgary AB T3E 4E3 Canada, tel: 1403-217-8091  Cost of minimum purchase - 6 pieces 'cause you need 3 packets of 2 each - with shipping was $22 Canadian or about $3usd each.  If you cannot find a cane tip, then search for "rubber leg tips 3/4 inch" (photo, below) from Amazon - at about $6 each plus shipping.  Finally, back up to the bottom picture above, Home Depot does offer white rubber tips - four pieces for $2 or $.50 each - white is OK - but the black spray paint will cost you $10.  Or, best, search Ebay with "black 3/4" rubber chair leg furniture tip" and find the deal for 24 Shepherd tips at $0.66 each and make friends with all the Tiltall owners of the world.

Hmmm? OK, maybe such a good idea, I will do it - but they would not be less than $10 per set of three with postage.  UPDATE:  I followed my suggestion and have added one or three BLACK Shepherd rubber "tips" to my replacement part offerings.

Rubber Leg Tips Black, 3/4" from Amazon at $6 each with shipping

Posted by Gary Regester at 3:11 PM